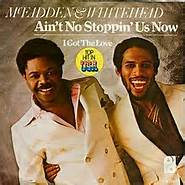 "Singer-songwriters John Whitehead and Gene McFadden were an integral part of the Philadelphia music scene in the 1970s." So begins the decision by the U.S. Court of Appeals for the Third Circuit in Whitehead v. The Pullman Group, LLC. (For the uninitiated, click here for a summary of the "Philadelphia Sound" to which this sentence refers and of which plaintiffs Whitehead and McFadden were a part.)

At issue in that case was Whitehead and McFadden's song catalog, which includes, among other things, the publishing rights to their biggest hit, "Ain't No Stoppin' Us Now." In 2002, defendant entered  into a contract with Whitehead and McFadden that gave him the exclusive right to purchase the catalog following a 180-day due diligence period. After this period, defendant had the right to terminate the contract upon written notice to Whitehead and McFadden. Defendant claimed that his due diligence revealed several tax liens that  diminished the value of the catalog. He claimed that he communicated this to Whitehead and McFadden over the phone. They responded that they would get back to him with more information, but instead contacted him and told him that they did not want to consummate the transaction, which defendant claimed was a breach of the agreement.

Several years later, after both Whitehead and McFadden died, their estates received an offer from Warner Chappell Music to purchase Whitehead and McFadden's song catalog. Shortly before the deal was completed, however, defendant wrote the estates and notified them of the existence of the 2002 agreement. (The estates were unaware of the deal with defendant prior to receiving this letter.) Shortly thereafter, Warner Chappell Music withdrew its offer. The estates then sued in state court seeking (1) a declaratory judgment that the 2002 contract was void, and (2) damages for defendant's alleged tortious interference with their deal with Warner Chappell Music. Defendant removed the lawsuit to federal court and counterclaimed for his own declaratory judgment and damages for the alleged breach of the 2002 contract. Both sides eventually agreed to arbitrate their disputes.