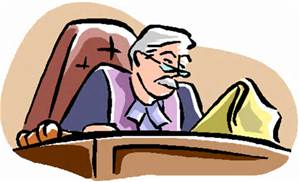 [Apologies for the Blue's Clues reference in the title to this post.]

In his concurring opinion in a recent Seventh Circuit decision — United States v. Dessart — Judge Posner agreed with the majority's conclusions, but wrote separately to express his "reservations about some of the verbal formulas in the majority opinion." He did not "criticize the majority for reciting them" because, as he noted, they are "common, orthodox, even canonical." But he did criticize the "verbal formulas" themselves as being "inessential and in some respects erroneous" and thus, he urged, "ripe for rexamination."

What were the "verbal formulas" that Judge Posner was so keen to criticize? Just some of the legal standards that we see recited in opinions every day. For example, the commonly-used "abuse of discretion" standard, of which Judge Posner appears not to be a big fan. In his concurring opinion, Judge Posner noted that the majority defined this standard as including "among other missteps, 'material errors of law.'" This apparently did not jibe with Judge Posner's understanding of discretion and its abuse, as he explained:

Of course, material errors of law are potentially very serious, but what has that to do with discretion or its abuse? Common as the term "abuse of discretion" is in opinions dealing with appeals from district court decisions, I find it opaque. If the appellate court is persuaded that the trial court erred in a way that makes the trial court's decision unacceptable, it reverses. What has discretion to do with it? And "abuse" seems altogether too strong a term to describe what may be no more than a disagreement between equally competent judges – the trial judge and the appellate judges – that the appellate judges happen to be empowered to resolve as they see fit.

Similarly, he challenged the majority's similarly well-settled statement that an appellate court, when reviewing a trial court's decision to issue a search warrant, must afford that decision "great deference." (Among the issues in the Dessart case was whether a search warrant was supported by probable cause.) Judge Posner acknowledged that the standard comes from a Supreme Court decisions holding that "[a] magistrate's determination of probable cause should be paid great deference by reviewing courts," but questioned it nonetheless. First, he questioned why "great" deference should be afforded to such decisions since "warrants [are] usually issued by the most junior judicial officers – and often police or prosecutors can shop among magistrates for one who is certain or almost certain to respond affirmatively to a request to issue a warrant." Second, Judge Posner noted that "[n]othing in the [Fourth] amendment requires warrants – ever," therefore it was not fair, in Judge Posner's opinion, to conclude, as is often concluded, that the Constitution expresses a preference for searches conducted pursuant to warrants or to afford great deference to a trial court's decision to issue one.