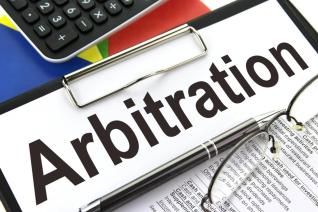 New Jersey courts frequently invalidate arbitration provisions that do not clearly and unambiguously explain that plaintiffs are waiving the right to seek relief in court and have their claims decided by a jury (see here, here, and here for examples). In Flanzman v. Jenny Craig, Inc., the Appellate Division invalidated one for an even more basic reason — the provision did not identify any arbitration forum or any process for conducting the arbitration.

In Flanzman, plaintiff worked for defendant. After she was terminated, she sued, alleging age discrimination. Defendant moved to compel arbitration under an agreement with plaintiff that provided:

Any and all claims or controversies arising out of or relating to [plaintiff’s] employment, the termination thereof, or otherwise arising between [plaintiff] and [defendant] shall, in lieu of a jury or other civil trial, be settled by final and binding arbitration. This agreement to arbitrate includes all claims whether arising in tort or contract and whether arising under statute or common law including, but not limited to, any claim of breach of contract, discrimination or harassment of any kind . . . [Plaintiff] will pay the then-current Superior Court of California filing fee towards the costs of the arbitration (i.e., filing fees, administration fees, and arbitrator fees).

Plaintiff did not agree to this when she began her employment with defendant. Instead, defendant presented it to her 20 years after she was hired, and plaintiff signed it to keep her job.

The flaw in the provision is that, even if it adequately advised plaintiff that she was giving up her right to a jury trial, it says “nothing about what forum generally replaced that right.” The trial court recognized this shortcoming, but instead of declaring the provision unenforceable, simply allowed plaintiff to choose the forum. Plaintiff appealed, arguing that the arbitration agreement lacked mutual assent and was therefore invalid.

The Appellate Division agreed. As with any other contract, parties to an arbitration agreement must reach that agreement by mutual assent. To do that, “the party from whom an arbitration clause has been extracted [ ] must clearly and unambiguously agree to waive his or her statutory rights.” Also, because arbitration involves the waiver of the right to sue in court, “courts take particular care in assuring” both “the knowing assent of both parties” and “a clear mutual understanding of the ramifications of that assent.” In other words, a party that agrees to arbitrate must understand “both the rights that have been waived and the rights that have taken their place.”

In Flanzman, the Appellate Division held that “[s]electing an arbitral institution informs the parties, at a minimum, about that institution’s arbitration rules and procedures.” It noted that frequently-used forums like the American Arbitration Association (“AAA”) and Judicial Arbitration and Mediation Services (“JAMS”) have established rules and procedures that would inform parties about the rights that will replace those they waived in an arbitration provision. And, the Appellate Division observed, these are not “insignificant aspects of the arbitration process,” as the “associated rights connected with the selection of an arbitral forum generally establish the substantive and procedural setting for the entire arbitration process.” Because the provision in Flanzman did not identify a forum, it was unenforceable.

As an example of an acceptable designation of an arbitral forum, the Appellate Division cited to the arbitration provision in Atalese v. United States Legal Services Group, L.P. (This is somewhat ironic given that the provision in Atalese was deemed unenforceable, for different reasons, and has been the basis for most of the recent decisions striking down arbitration provisions. But, at least on this issue, the Appellate Division believed that it got it right.) That provision provided: “The parties shall agree on a single arbitrator to resolve the dispute . The matter may be arbitrated either by [JAMS] or [AAA] . . . The conduct of the arbitration shall be subject to the then current rules of the arbitration service.”

The Appellate Division also referred to a decision from a federal court in Mississippi for another example, this time of a provision that addressed a situation where the chosen arbitral forum was unavailable. In that case, the parties chose a forum that was, unbeknownst to them, non-existent. Fortunately, however, their agreement dealt with this issue by providing:

Arbitration to be conducted by ADR Associates, LLC through its Dispute Resolution Process for Consumer Healthcare Disputes (“ADR Associates Rules”), which are incorporated herein b[y] reference, and as more fully set forth below. If ADR Associates, LLC is unable or unwilling to conduct the ADR process at the time of the dispute, the parties shall mutually agree upon an alternative organization that is regularly engaged in providing ADR services to conduct the . . . Arbitration. If the [p]arties cannot agree on a[n] . . . arbitrator, each party shall select one . . . arbitrator and they together shall choose a third . . . arbitrator who shall conduct the ADR Process.

While the Appellate Division made clear that it was not suggesting that any “magic words” needed to be included in arbitration agreements, it held that, to be enforceable, an arbitration provision must identify an arbitral forum like JAMS or AAA, or must at least identify the process for selecting a forum.