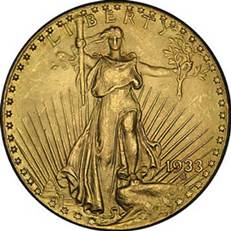 I have written before about Langbord v. United States Department of the Treasury. (Click here and here for the prior posts.) This is a case about ten, 1933 Double Eagle coins, which I described in a prior post as follows:

[The Double Eagle] is a $20 gold piece that was designed by famed artist Augustus Saint-Gaudens after he was commissioned by President Theodore Roosevelt to help beautify American coinage. Almost a half million Double Eagles were minted, but none were ever officially released into circulation. Shortly after they were minted, newly-elected President Franklin D. Roosevelt, seeking to stem a run on the banks, issued Executive Order 6102, which made it illegal to "hoard" large amounts of gold. Accordingly, the U.S. Mint was ordered to stop issuing gold coins and to melt down any gold coins in its possession, including the Double Eagle. As part of this process, two Double Eagles were sent to the Smithsonian Institution for posterity, but the rest were supposed to have been melted down.

However, not all of the coins were melted down. Around 20 were smuggled out of the U.S. Mint. Over the years, nine were located by, or returned to, the Secret Service. Another one was seized by the Secret Service in a sting operation at the Waldorf Astoria after the owner, Stephen Fenton, was lured there by agents posing as potential buyers. (It was later stored in the World Trade Center but was removed just a few months before the 9/11 terror attacks, just one of the interesting facts in this case.) After Fenton sued, the government agreed to auction off the coin and split the proceeds with the owner. It sold for $7.6 million, more than twice the world record for any coin sold at auction at the time.

Shortly after the auction, Joan Langbord notified the government that she had found 10 Double Eagles in a safe-deposit box belonging to her father, Israel Switt. (According to the government, however, this discovery was hardly fortuitous. The government claims that all of the Double Eagles that escaped its control went through Switt's hands. It claims that he worked with a corrupt cashier at the U.S. Mint in Philadelphia to smuggle Gold Eagles out of the Mint before they could be melted down.) The lawyer representing Ms. Langbord and her sons, the same one who represented Fenton, proposed a sale of the 10 coins like the one agreed to with Fenton. The government  indicated it was "amenable," so the Langbords sent the coins to the U.S. Mint for inspection. After the coins were authenticated, the Langbords requested that they be returned, but the U.S. Mint refused. The Langbords responded by submitting a "seized asset claim" demanding the return of the coins. When they were not returned, the Langbords sued.

The district court allowed the government to keep the coins, but a three-judge panel of the U.S. Court of Appeals for the Third Circuit, reversed, ordering that the coins be returned to the Langbords. The government then petitioned for en banc review, which was granted. (Check out my prior posts for the details on both.) In a decision released on August 1, 2016, the full Third Circuit reversed the three-judge panel and ordered that the government can keep the coins.

At the heart of the case was whether the government was required to file a civil forfeiture action after the Langbords demanded that it return the coins. If it was, then the Civil Asset Forfeiture Reform Act (CAFRA) would apply. CAFRA was passed in 2000 as a reaction to "public outcry over the government's too-zealous pursuit of civil and criminal forfeiture." Under CAFRA, the government must, within 90 days of seizing property, return the property or file a judicial civil forfeiture proceeding. In Langbord, the government did neither. But, it claimed that CAFRA did not apply because the government was not seizing property, but was instead simply repossessing property that had been stolen from the government. The district court agreed with this argument, the three-judge panel of the Third Circuit rejected it, but the full Third Circuit accepted it and therefore ordered that the government could keep the coins. The opinion is lengthy, and includes dissenting opinions on the CAFRA issue, but is worth a read. Also, given the history of this case, it seems certain that a petition for certiorari will made to the US Supreme Court, so stay tuned for more.

[NOTE: I put "coins" in quotes in the title because the parties dispute whether the 1933 Double Eagles are actually coins. As the Third Circuit noted: "The Langbords claim they are coins because they bear official indicia of their use as instruments of stored value; the Government disagrees because they were never circulated." The court did not resolve this "immaterial dispute" but nonetheless referred to the Double Eagles as coins in its opinion for ease of reference.]